On this Veteran’s Day, I am thankful for the men and women, both past and present, who serve in our armed forces with dignity and courage around our nation and our world. The sacrifices they make are many and great, and they go mostly unnoticed, except by those who are close to them, and often deeply affected.

In our own family, we have had, among others, a great-grandfather, great-uncle, and grandfather serve in three major wars, and neither my great-grandfather nor my great-uncle returned from World War I or World War II, respectively. This meant that my grandfather Bob, who was just a baby when his father, Augustus, was killed in WWI, never knew his dad growing up. My great-uncle Bill was serving in France in 1944 when he fell in the line of duty. He was just 20 years old. He was his parents’ only living son, my grandmother, Jean’s only sibling. She still misses him today.

If these losses weren’t enough to convince me of the horrors of war, my very friendly and outgoing grandfather’s life-long reticence to speak of his own experiences in both World War II and the Korean War left no doubt in my mind. Nor did the scars on my grandfather’s hands and arms which he wore as a reminder of the injuries he suffered when Kamikazi aircraft hit his naval carrier during the second world war. He was very badly burned but returned home and enjoyed a long, wonderful life, becoming father to three children (the first of whom was my own dear Mom) and grandfather, or “Pa” as we called him, to seven grandkids (the first of whom was Yours Truly!). Pa was blessed to live long enough to see four of his great-grandchildren born and hold them in his arms, arms which still bore the scars of a fiery battle fought more than 50 years earlier.

Mine is not the only family who carries memories of those who sacrificed in service to their country. On this Veteran’s Day, no matter our individual stances on wars, past or present, I hope we will each pause and thank God for the freedoms we enjoy, many of them because of sacrifices which people we never knew made on our behalf. Thank you to our veterans. 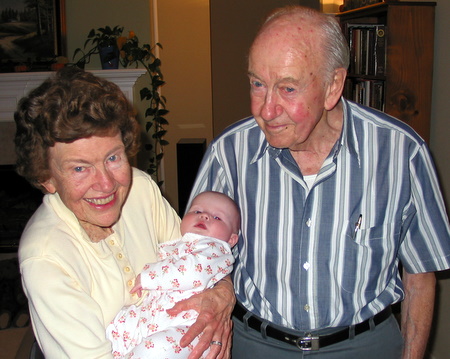