Last week, Jay was kind enough to take the children to their piano lesson for me, since I was at a dr’s appointment. While I was still waiting for things to wrap up with the appointment, an employee from the front desk area popped in to tell me that my husband had been trying to contact me for some time, but wasn’t getting any answer on my cell phone…and oh by the way, he was taking our son to the emergency room. And then there was something about an injured arm…that was all. Which was not nearly enough information for this Momma.

A trip to the ER is never good, but it seems even worse when you are the parent who doesn’t know what is going on, and with which one of your children? After a bit of panic over what might be happening, my first thought was, “I have three sons-which one’s turn is it for an ER trip?”. After all, two of the sons were supposed to be at their piano lesson by now. How many people have been seriously injured at a piano lesson?

Well, suffice to say we have a new rule at our house: no playing in the tree outside Mr. Q’s house before piano lessons begin. It turns out they’d arrived early for their lessons and while they waited for it to be time to go in, Jonathan was swinging in the tree like a monkey. All was well until he attempted what would have been a very impressive dismount, had it not been for the fact that he slipped, and plummeted to the ground. Where he then began screaming in pain and clutching his arm. Jay told me later that it was fairly obvious the arm was broken…that near the wrist, the point of most pain, he could see that the bone angled oddly.

I met them at the emergency room, where our boy who is normally tough as nails, was clearly in a lot of pain, and none too happy about it. 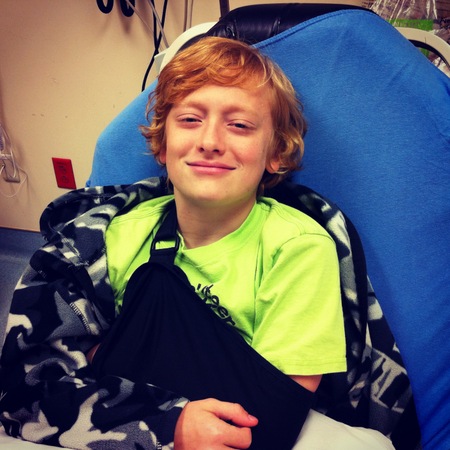 Little brother provided encouragement in the form of helping his brother watch movies on Daddy’s Ipad while they waited for the x-rays to come back. 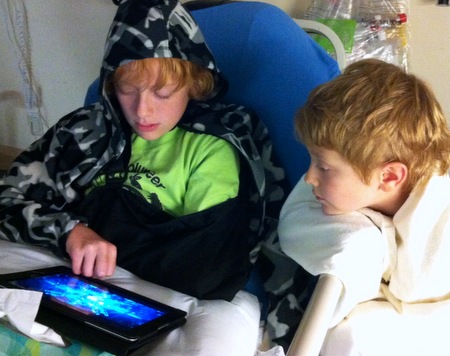 The verdict was indeed a break, all the way through the radius. Jonathan received a splint from a very nice EMT, and we were told to follow up with an orthopedist later in the week.

Turns out there are lots of orthopedists in the Dallas area, but among our friends, there was one doctor whose expertise with pediatrics stood out, and we visited with him late in the week. We entered his office in rather high spirits: Jonathan and I both thought we were going to walk out of there in a couple hours with a cool camouflage, maybe even waterproof cast.  Instead we received the rather disheartening news that due to the angle of the two pieces of broken bone, Jonathan was going to need to return the following week for surgery in order to properly set the break before they would even consider applying a cast. 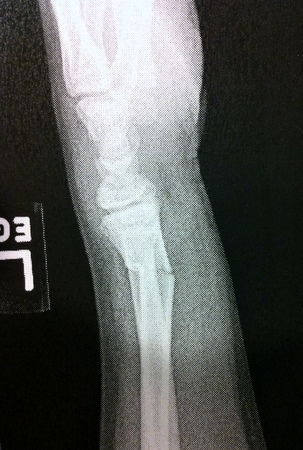 To say that this announcement was not happily received is perhaps a bit of an understatement.

And so, tomorrow, our boy will undergo surgery. He is apprehensive about the procedure, and would really like to fast forward to the recovery part of all this so that he can concentrate on figuring out how many signatures he can possibly fit on an arm cast. And me? Well, after the call from the friendly employee who works in the financial portion of the orthopedist’s office, I’m reeling at how expensive it can be to play in trees. And counseling my children that perhaps they ought to strongly consider a career in medicine!

3 Replies to “A little surgery”